Once upon a time…I was playing with this pretty little princess.

She belonged to a good friend who kept her on a tight leash.  For some reason though, she had recently started getting a little out of hand, with him and with other submissives in our circle.  It wasn’t the first time she had pushed to see just what she could get away with.  Sometimes she seemed to enjoy the treatment her bratty attitude earned her.  Her Master gave her just enough rope to really tie herself up in some nasty knots and then he decided to put her back in her place.  As part of her punishment he had asked me to remind her of her position, a position she had chosen.

When she arrived at my house wearing frills and lace she looked like butter wouldn’t melt in her mouth.  She was dainty and very, very prissy.  She was pristine.  My first instruction, as I led her into my back yard, was to get her down on the ground. I wanted to make her crawl and get those pretty little knees and hands dirty.  On this night, however, she looked me straight in the eyes and said no.

Now please understand, in my world no is not a safe word.  It is an answer to a question, not the response a submissive gives when ordered to do something.  It’s always best to make sure though.  I knew her safe word and I asked her if she was invoking it and calling the whole session off.  It made no difference to me one way or another.  I was doing a favor for a friend.  If she couldn’t go through with it then she would be sent back home to her Master and the two of them would hash it out between themselves.
This little princess stood in my freshly watered yard, with her chin held high and stared at me defiantly…for all of thirty seconds.  Then her bottom lip trembled, she bowed her head and lowered her gaze to the ground.  I almost didn’t catch it when she repeated the word no.  So I asked her again if she wanted to use her safe word and stop.  I am sure she was crying when she said no just a bit louder and after a slight hesitation added my title.  It was good to get that cleared up.  I gave her a chaste kiss on the forehead and stroked her carefully styled hair…and then I pushed her down onto the muddy ground. 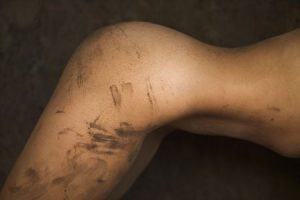 I made her crawl randomly around the yard, occasionally using my foot to send her sprawling across the grass and mud.  By the time I was ready to take her inside she was a wet, dirty, bedraggled mess.  She looked nothing like the pampered princess that had arrived on my doorstep before.  I left her lying in the mud with instructions to count to 200 and then get completely undressed before coming in through the back door of my garage.

When she crawled through the door a couple of minutes later she froze.  Gathered in my garage were a small group of people.  People she knew.  Her Master had invited a few other submissives to witness, submissives that his princess had started looking down on and speaking cruelly to.  Several buckets of water were lined up along one wall and each of the submissives had been given a large plastic cup to fill from them.  As they repeated the nasty things that had been said to them by the little mud puppy huddled on my garage floor they doused her with cold water.

Over and over they threw cold water on her until her humiliation reduced her to a shivering and sobbing creature who begged softly for their forgiveness.