My Introduction to Fire Play 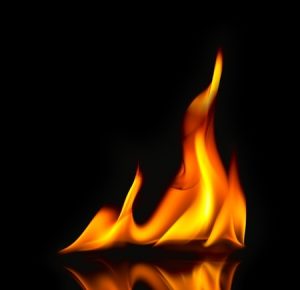 Some years ago a friend of mine introduced me to fire play. At first I was really dubious because I was concerned about harming someone by making a mistake. As it happened they were going to an exhibition (some leather and lace thing up in town) and asked me to come watch them do a demonstration. I thought, ‘yeah, why not’, so I got my tickets and me and my girlfriend went off and watched this thing.

Our friends were professional, thorough and mesmerizing to watch! I loved it! I was captivated by the idea of it. My female friend who was part of the demonstration team (her and her then ‘boyfriend’) asked me to be the ‘spotter’ for a few moments and her boyfriend gave me some instruction on how to keep my eyes out for renegade flames and sparks.

All the while, they had their ‘model’ a girl who called herself ‘Hot Spice’ on their table, face up, hair in a safety cover, ready and waiting to be set on fire. In actuality, they don’t set fire to her, but rather, ignite flash cotton—which gives a really short, bright burst of flames like fireworks but that only last a few Nano-seconds. ‘Hot Spice’ lay there, in calm repose as ‘Bob’ (my friend’s boyfriend and team mate) picked up two drumstick type things; the sort they use for playing kettle drums, and he dipped them in this special concoction that allowed them to be set alight. He did so, and waved them gently over ‘Hot Spice’s’ skin. Now, I should mention, they have a massive bunch of safety rules and protocols involved in this, so he wasn’t just setting her ablaze. They were artistic and smooth and they played this really earthy music in the background that made my girlfriend’s toes curl.

The model, after a short time, was asked to sit up and flip sides, so they could do her back. She complied and once she was situated, Jean, my friend, asked if I wanted to try. I looked at my girlfriend and she nodded her wide-eyed approval. I sort of knew in that moment she wanted me to learn this stuff because it was captivating her as much as me!  I took the drumsticks from Bob and he showed me what to do. At first I was quite gentle because I am a big guy with big hands and sometimes don’t know my own strength. However, after a few strokes along ‘Hot Spice’s’ back and legs I felt a little more comfortable. We also tried some cupping, which I loved and my girlfriend was allowed to join in with ‘Hot Spice’ and actually let me cup her, too! We had really great sex that night!

After the demo was done we went back and spoke with Jean and Bob and they said I had a natural gift. Bob offered to give me fire play lessons and I took him up on it. It was an amazing experience and a stimulating kink that my girlfriend and I enjoy on a regular basis now!