Submitted by Gene and Hazel 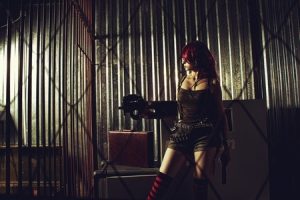 While most people have a deep fear of being locked up and put in prison (and that is more than enough to keep them on the straight and narrow) others do like to dabble in the idea of being incarcerated by their partner in a role play game. The emulation of the scene is not nearly as terrifying as the real idea, but it is great to play around with power exchange roles and uniforms. My wife and I often play this type of game on weekends.

We have a special room in our dungeon that is set apart like a cell. The ‘bars’ are not made from steel, but rather, plastic plumbing pipes, which we rigged to ceiling and floor with 2×4 wood, routed with slots for the pipes to stay in. We then sprayed them silver using regular metallic car paint. It looks effective and we know that in an emergency we just push and they will come out. We constructed a lock by actually making one from a piece of wood and the ‘prison cell door’ looked extremely convincing and the lock actually did have a function and a key.

So, we have our cell and we toss our ‘lucky quarter’ every Friday or Saturday evening (depending on schedules) to see who goes to ‘prison’. The ‘sentence’ starts the next morning at 8:00 am and stops at 9:00pm in the evening. The prisoner gets oatmeal for breakfast. Lunch consists of soup and sandwich and dinner is usually rice and chicken.

We also have our own prisoner and guard uniforms that we wear. Depending on the luck of the ‘lucky quarter’ we don the appropriate attire. The prisoner’s day consists of a routine that includes ‘hard labor’, such as running in place for 30 seconds, picking up a brick and putting down again 30 times, or until the guard is satisfied, writing lines in chalk on the blackboard painted cell wall, taking packing peanuts out of a box and putting them all back in again one at a time and really tedious stuff like that. 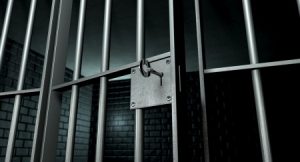 Games like this keep our relationship extremely open and interesting and often introduce new ideas and share our thoughts during the week, so we can plan ahead for the weekend. It is not always the prison thing but we do use that scenario more often than most other things we role play. Give it a shot some time, you might enjoy it!