Submitted by Terry and Craig

Terry and Craig are male lovers from the UK who share a kinky interrogation fantasy. Terry reached out to us to share their story. 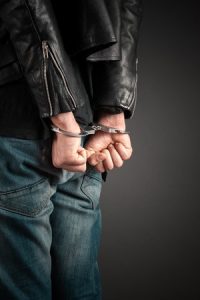 He was a spy and I knew it. His dirty tricks had led me up the garden path too many times and I was done with him. In uniform I was a burly six feet two and He would know I was a cop. However, I planned to catch this dude in plain clothes and he would have plenty to answer for.

I had watched him about a week, and I knew his routine…..leave the house at 8.42am, walk to the subway, catch the 8.58 train, get off at stop number 9, walk north for about a mile and head into the office building. His work day ended about 5.45pm and He would take the 6.02pm train, back home by 6.25pm unless he stopped at the store.

I waited in my car at 5.45pm the next evening and watched my clock as time ticked away. Mentally I assigned each second to his journey; his catching the 6.02, counting the stops, his walking from the subway station and, perfectly on time, there he was, at 6.22pm.

It was winter, dark and cold. I closed the car door, strolled across the street and headed to the same apartment building that he headed for. I didn’t make eye contact. He watched me go up the stairs just ahead of his and followed, quite slowly. I reached to push a button but stopped, said ‘evening, sir’ and tipped my hat. He took a key out of his pocket and gingerly opened the street door. I followed him as he went to the mail boxes but I carried on to the elevator so as not to attract his attention.

Presently, he joined me at the elevator and we waited together in silence. Once inside, I pushed his floor number as my own and then asked his which number he wanted. “The same, thank you,” he said, still barely glancing at me. We exited the elevator and I beckoned his out, said good night and headed in the opposite direction. I glanced back at him as he put his key in the door and then enter the apartment. As he flicked the lights on and went to close the door my foot stepped into the gap and, quicker than he could blink I flashed my badge, pushed my way into his apartment and closed the door. 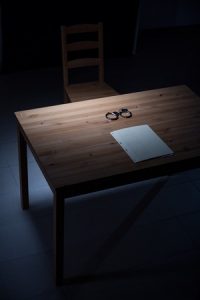 I locked the door and put the chain across it, then took out my gun. He looked terrified and I did feel bad for scaring him but I needed answers. He asked what I wanted and I told him ‘The truth’. I pointed to the heavy wooden chair and told him to sit. I had come equipped with handcuffs and other ‘tools’ to use in case of not getting answers.

I took the handcuffs from my waistband and cuffed his hands behind and then zip tied them to the chair, to prevent escape. Once he was helpless I extracted a small paddle from my other pocket and placed it on a nearby table. I saw him eye it and a tiny smile flashed across his lips.

Within minutes I had removed his tie, unbuttoned his shirt and loosened his belt. I undid it, exposing his obvious excitement at the interrogation. I too was obviously aroused as he could tell by looking at my pants. I opened them within inches of his mouth and gave him instructions. Wanting to prolong the interrogation I pulled away, leaving him distraught. I paddled his nipples and stroked his hardness until his eyes rolled, then stopped. “The subject will answer all questions truthfully or suffer the consequences,” I told him.

Well, to cut a very long story a little short, this was actually a little role play that my boyfriend and I like to do once in a while to spice things up. We usually go out for a romantic dinner and then go home separately so we can add to the suspense. You really should give interrogation a try some time. Add your own little twists to keep it interesting and hot!