Being Knotty – The Art of Tying Knots
Domme Morrigan 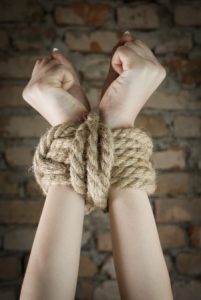 When I first began my journey along this alternative life path a wise Dom once told me not to do something to someone that I wouldn’t be willing to have done to me.  At first I thought he must be trying to trick me into something.  I knew that I didn’t have a submissive bone in my body, why would I want to give up my control for any reason?  The more I thought about it, though, the more it made sense.  How can I know just how to wield a flogger on someone if I don’t know how a flogger feels on my own skin?  For that matter, what better way to learn something new than to have it demonstrated on myself first?

Since then I’ve been on the receiving end of many things, but one in particular will always stick with me as the one thing that could bring out that tiny little bit of submissiveness I didn’t know I had in me.

I’d never gotten fancy when binding one of my playmates.  I either used a set of leather shackles or handcuffs.  I didn’t really know my way around a hank of rope, and I wasn’t too proud to admit it.  So when I was invited to a demonstration of rope bondage techniques I was eager to go.  I like learning new things.

The demonstration was given by a couple who didn’t just teach technique, they made their own ropes from various materials.  Using his wife as a model, he showed several different styles of binding and tying and wrapping and with each one I felt drawn to know more.  When the demonstrations were over they asked for volunteers for a full body bondage session.  I don’t think anyone was more surprised to see my hand shoot up in the air than I was myself. Before I knew it I was stripped down to my panties in front of people who had always seen me in nothing less than a dominant role and this couple began weaving their magic on my body.

The rope they used was soft, yet it had a bite to it.  She held my arms behind my back while he wound the rope around and between, pulling it taut but not too tight.  As my arms were bound from wrist to elbow behind my back my shoulders were naturally drawn back and my breasts thrust out high.  Here was where their hands led the ropes next.  Round one and then the other, up around my neck and down again.  Somewhere along the way I stopped paying attention to how and where they tied their knots.  My body began to grow warm and the less I was able to move the more oddly free I felt.  When they had me bound in an intricate design like a fine piece of macramé artwork, they laid me down on the floor and covered my eyes with a blindfold.

I heard movement, felt the closeness of others as they leaned over me to see how the knots sank into my flesh.  They touched the knots, touched my skin and ran their fingertips over the rope; and even though none of their touches were sexual I found myself becoming aroused.  They talked as if I wasn’t even there, I wasn’t real, I was simply a piece of artwork to be admired.  Somehow, in not having anything expected of me other than to lie still and display the riggers work I had found out something freeing about myself.