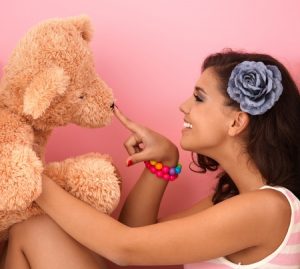 My bemusement with my role of playing “Auntie” to a grown woman with and age play fetish lasted about halfway through dinner.  My friend has what is called a “little” age of around six. Meaning that when she is in her “little” role she acts much the way a six year old child will.  Apparently this includes being a very messy eater, getting into things she shouldn’t, and throwing a few temper tantrums.  But I get ahead of myself.

Daddy had left a schedule of sorts that would allow the evening to flow smoothly for “Auntie Morrigan” and his little one.  At least that was the idea.  When dinner time came I sat our little miss at the kitchen table so I could keep an eye on her while I cooked.  We were having spaghetti, something simple that I had been assured she would eat.  It really was like babysitting a child.  While I put the water on for the pasta I noticed that she had begun to wriggle and squirm and bite her lip.  After a few minutes of watching her fidget I finally asked what was wrong and was informed that she needed to potty.

I have to admit I simply stared.  This wasn’t something I had even considered being part of the game.  I hadn’t been briefed about this aspect.  I told her where the bathroom was but wasn’t really surprised when she refused to go alone.  She held my hand as I led her down the hall, but when I would have left her to her business she let out a wail of fright.  She was scared to be left alone in my big, scary bathroom.  What else could I do?  I leaned against the doorframe while she sang an absolutely adorable little verse about the bodily function she was performing.  I know several people who have bathroom fetishes, but I had no idea it could be made into something cute.  When she’d finished I had to stop her as she dashed for the door and make her wash her hands.  It really was the strangest experience for me.

She took her place back at the table and kept me entertained while I finished dinner preparations by singing many other children’s songs, some I actually remembered from my own childhood.  Of course I had to sing along, much to my little friend’s delight. I thought we were getting along really well…until I sat her dinner on the table in front of her.

I guess that at home she had her own little place setting; plate, bowl, cup and silverware all with some cartoon princess or another on them.  Daddy had forgotten to pack them in the bag.

The bottom lip began to tremble, big blue eyes filled with tears and I knew that I had to come up with something quick to avoid a meltdown.  Being single and without children I couldn’t think of anything in my kitchen that could be substituted for cartoon covered dishes.  Then I remembered some paper plates left over from some get together.  They weren’t cartoon princess plates but they had bright and pretty flowers on them.  I could only hope they would work.

I made the food transfer while she sniffled and watched me with a pouty lip sticking out.  There was a tense moment while I watched her consider eating or throwing a fit.  Hunger must have won out because she gave me her megawatt smile and began to eat.  Sort of.  By the time the meal was finished I swear that she had more on her clothes and face than I had originally put on her plate.  There was sauce everywhere.  It was even in her hair. When I asked her how we were going to deal with the mess she said only one word in reply.

That was definitely not in the job description.

To be continued…… see part 3