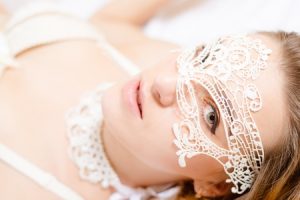 A few weeks ago I made a bet with a good friend of mine, another dominant who runs in the same social circle that I do.  We were at a gathering and there was a competition of sorts going on between two submissives.  We weren’t involved, merely spectators, but we decided to make it interesting for ourselves.  We each had our favorite between the two competitors, so all we had to do was work out the details of our bet.  I may have been a wee bit overconfident in the abilities of the submissive I chose and I went along with my friend’s suggested prize.  The loser would be the server at a social function the winner would hold.  The winner also got to choose what the loser would wear that night.  As I said, I was a bit overconfident in my chances of winning the bet… and I lost.

At my friend’s direction I had brought along a few items of my own to go with the costume I would be wearing.  Everything was white, from the spiked heels to the thigh high stockings with the lacy garter belt and matching bra and panties.  I looked like a bride getting ready for her wedding day.  I am vain enough to admit that the color set off my tan nicely. When the rest of the costume was brought out, however, I vowed revenge on my dear friend.  There were only two pieces.  One was just a flower to go in my hair, the other was a frilly lace apron…white of course.  It was small consolation that his wife was dressed in much the same attire, except her costume was baby pink.  I was thankful I had the white.

As the guests began to arrive it was my job to see to it that they had drinks and anything they wanted from the buffet table.  The story of our bet had gotten around so there were no startled looks or awkward questions.   Also there were rules that were already in place about just how far they were allowed to go.  So when the first hand slid up the back of my thigh I knew that it would stop at the edge of my panties.  Anywhere that cloth covered was off limits to touching.  Still, that left an awful lot of skin exposed to admiring hands.

Let it never be said that I did not live up to the spirit of the bet.  I played my part wholeheartedly.  I flirted and I pranced, I posed and I teased.  I even allowed one gentleman who had won a large pot to pull me onto his lap in the excitement of the moment.  I actually found myself getting into my role and having fun.  I gave my friend more than he counted on when he suggested the terms of our bet, but he should be careful next time.

Next time his luck may not be so good and he might find himself at my mercy.